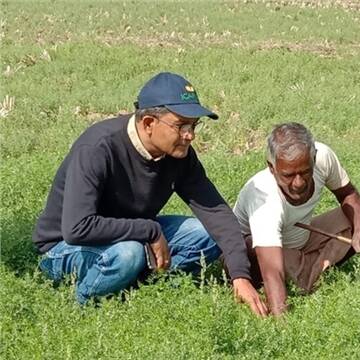 Study of appropriate planting time and response to agronomic management practices is imperative for the newly introduced cactus pear (Opuntia ficus-indica (L.) Mill.) into a semi-arid region of India. Responses of cactus pear to agronomic practices...

Chickpea (Cicer arietinum L.) is an important food legume crop grown in arid and semi-arid regions of the world. In India, kabuli chickpea is grown in central India in ~0.5 million ha, predominantly under short winter (

Food legumes play an important role in ensuring food and nutritional as well as environmental security through crop diversification and sustainable intensification in India and elsewhere. India imports nearly 4–5 million tons annually to meet its...

Chickpea (Cicer arietinum L.) is an economically important food legume grown in arid
and semi-arid regions of the world. Chickpea is cultivated mainly in the rainfed, residual
moisture, and restricted irrigation condition. The crop is always prone to...

Lentil (Lens culinaris Medikus subsp. culinaris, 2n = 14) is a cool-season legume with high production potential for multiple uses. However, limited molecular research has been conducted in this species owing to its large genome, which impedes the...

Heat stress at later growth stage is one of the major limitations in achieving potential yield in barley. Incorporation of heat tolerance in the variety development process is an essential task that breeders would like to achieve by exploring new...

Lentil is a staple in many diets around the world and growing in popularity as a quick‐cooking, nutritious, plant‐based source of protein in the human diet. Lentil varieties are usually grown close to where they were bred. Future climate change...

Our study reports the identification of two novel multi-flowering (MF) genotypes,
PMF-1 and PMF-2, in cultivated lentil (Lens culinaris Medik.), stably
forming up to five flowers per peduncle (FPP) on I2 nodes at multiple flowering
nodes (beyond the...

Drought is a major constraint to chickpea production leading to maximum crop loss. Further the narrow genetic base of chickpea (Cicer arietinum L.) can be widened by crossing them to landraces and wild species of which landraces provide valuable...

Domesticated lentil has a relatively narrow genetic base globally and most released varieties
are susceptible to severe biotic and abiotic stresses. The crop wild relatives could provide
new traits of interest for tailoring novel germplasm and...

Climate change poses a significant threat to agroecosystems, especially in the dry areas, characterized by abrupt precipitation pattern and frequent drought events. Ideal crops, tolerant to these events, such as cactus, can perform well under such...

Climate change poses a significant threat to agroecosystems, especially in the dry areas,
characterized by abrupt precipitation pattern and frequent drought events. Ideal crops, tolerant to
these events, such as cactus, can perform well under such...

Is DNA Fingerprinting the Gold Standard for Estimation of Adoption and Impacts? A Case of Lentils in Bangladesh

In the early 1980s, disease susceptibility in short-season lentil landraces began to limit productivity in areas where relay cropping took place in Bangladesh. Since then, several improved high-yielding lentil varieties, which are resistant to rust...

Livestock production in arid and semi-arid regions is facing the challenges of low and erratic rainfall, poor nutrient soils, and high temperatures, which all contribute to inadequate forage production to support livestock. Under these challenging...

Agriculture is the mainstay of livelihood in arid region of Rajasthan and improvement in the agricultural productivity is one of the most important strategies to reduce poverty, ensuring food and livelihood security in the region. Moreover, the...

BACKGROUND
Grasspea (Lathyrus sativus L.), an important pulse crop in food, feed and for sustainable crop production systems in Ethiopia. Despite its advantage on nutrition and adaptability to harsh climate and low fertile soil, it contains a...

A set of 24 barley accessions from ICARDA, Lebanon grown under Indian field condition at experimental field of ICARDA- IRP, Amlaha, was analysed for Agromorphological and molecular variability High (40.11) to moderate (23.58) diversity was observed...

The present experiment was carried out at the Department of Genetics and Plant Breeding, Bidhan Chandra Krishi Viswavidyalaya, West Bengal, India to study the effect of imposed drought on relative water content, chlorophyll content and proline...

The development of transgressive phenotype in the segregating populations has been speculated to contribute to niche divergence of hybrid lineages, which occurs most frequently at larger genetic distances. Wild Lens species are considered to be more...

Adolescence covers 10-19 years of human age and is the transition period of life. The prevalence of Iron (Fe) deficiency in Nepal is around 23% population. High Fe content biofortied lines had developed to overwhelm the problem. This study was aimed...

Trial comprising fifty lentil genotypes was con- ducted at three locations in India during year 2013–2014 for estimation of grain Fe and Zn concentrations and to analyze G 9 E interactions by employing the additive main effect and multiplication...

The crop yield of lentil is below attainable levels which are mainly attributed to pathological factors especially lentil wilt caused by Fusarium oxysporum f.sp. lentis and Stemphylium blight caused by Stemphylium botryosum .Fusarium wilt is a...

Grasspea (Lathyrus sativus L.) a multi-purpose, climate smart legume crop which can sustain drought, waterlogging and salinity, and can be grown under minimal external inputs. It is grown on about one million ha area in South Asia mainly in rice...

Biodiversity and varietal development of pulses in South Asia

South Asia (Afghanistan, Bhutan, Bangladesh, India, Maldives, Nepal, Pakistan, and Sri Lanka) is the largest producer, consumer and importer of pulses with 28% and 38% share in global production and acreage. The present productivity of pulses in...

Power transformations: An application for symmetrizing the distribution of sample coefficient of variation from inverse gaussian populations

The coefficient of variation (CV) of a random variable (or that of the corresponding
population), defined to be the ratio of the standard deviation to the mean of the cor­
responding population, has been used in wide­ranging applications in many...

Biofortification through breeding interventions in lentil

Micronutrient deficiency affects more than two billion population worldwide especially in sub-Saharan Africa and South Asia. The deficiency in human body is commonly described as “hidden hunger” leading to a range of health hazards including low...

The lentil is among the earliest domesticates from the Near East Fertile Crescent. With seed of high nutritional value and a low water use, the food legume crop – lentils – is well adapted to cereal-based dryland cropping in Mediterranean and...

Low productivity of pilosae type lentils grown in South Asia is attributed to narrow genetic
base of the released cultivars which results in susceptibility to biotic and abiotic stresses.
For enhancement of productivity and production, broadening of...

Livestock rearing is an important pathway out of poverty for both pastoralist communities and mixed crop-livestock
fanners in drylands. Pastoral cnt.ecprises make an important contribution to the state, as well as to the national economy, despite...

Food legume crops are cultivated since the earliest days of agriculture for human food and animal feed.Today these crops are grown globally, providing food and nutritional
security. In particular, they are the main source of protein, macro and...

Crop wild relatives (CWRs) are invaluable gene sources for various traits of interest, yet these potential resources are
themselves increasingly threatened by the impact of climate change as well as other anthropogenic and socio-economic
factors. The...

Genetic diversity was studied among 21 accessions of lentil using SSR markers and morphological traits in order to assess the diversification of Indian gene-pool of lentil through introgression of exotic genes and introduction of germplasm. Among...

Lentil (Lens culinaris ssp. culinaris) is an important food legume crop with global
production of 3.59 million tonnes. The crop suffers substantial yield losses from
various biotic and abiotic stresses. Past efforts have been directed towards...

Ascochyta blight (AB), caused by Ascochyta lentis Bond and Vassil, is a major disease of lentil (Lens culinaris L. Medik.) causing 30–70% yield losses in
Canada, USA, and Australia and northern parts of India. The aim of the present study was to...

Lentils in production and food systems in West Asia and Africa

Lentil is a staple food legume that is traditionally grown in West Asia, East and North Africa, the Indian sub-continent and is a primary component of farming systems of those areas. Lentil plays a significant role in human and animal nutrition and...

Tannin free lentils: A promising development for specialty use and increased value

Tannin free lentils have been developed and are now available for production over a wide area in North America. The trait is controlled by a single recessive gene that eliminates tannin precursors in the seeds thereby making it possible to prevent...

A Global Survey Of Effects Of Genotype And Environment On Selenium Concentration In Lentils (Lens Culinaris L.): Implications For Nutritional Fortification Strategies

The lentil improvement program of ICARDA benefits from the information generated by the Legume International Nursery Network operating globally. Over the period 1996 to 2002, 12 different types of trials comprising lentil genotypes with weights<35 g per 1000 seeds, hence defined as small-seeded, were carried out at 111 environments in 16 countries. We found that 73% of the environments significantly (P < 0.05) differentiated the lentil genotypes. The predicted environmental mean yield ranged from 180 to 3670 kg ha−1 and heritability ranged from 14 to 95%. Significant genotype × environment interaction (G × E) was observed in 10 of the 12 trial types. Seven trial types provided a wide coverage of environments, and the top yielding entries of six of them represented stable genotypes in the sense of Type II stability. Genotype 8 (FLIP 90-41L) of LIYT-1996 (1970 kg ha−1 yield), genotype 9 (FLIP 95-39L) of LIYT-1998 (1633 kg ha−1 yield), and genotype 34 (FLIP 96-31L) of LISN-1996 (1567 kg ha−1 yield) were the highest yielding and most stable in the respective trial types. The cluster analysis resulted in five clusters, four of which comprised of 85% of the locations. In selecting the highest yielding lines common between (i) the top 10% of lines based on yield across all the environments at which they were evaluated and (ii) the top 10% of lines based on yield across the environments in the individual clusters, three genotypes—FLIP 2002-20L, FLIP 97-24L, and FLIP 92-36L—showed wide adaptation with production potential at up to 61% of locations tested. These genotypes have potential for direct release as varieties and may be valuable to use in hybridization program to generate new genetic stocks for adaptation and higher yield for a wide range of environments across lentil-growing regions.

Lentils from south Asia differ markedly in days to flower and several other traits from lentils in other major lentil producing areas of the world such as west Asia. Single-gene inheritance and a polygenic system were observed to control days to...