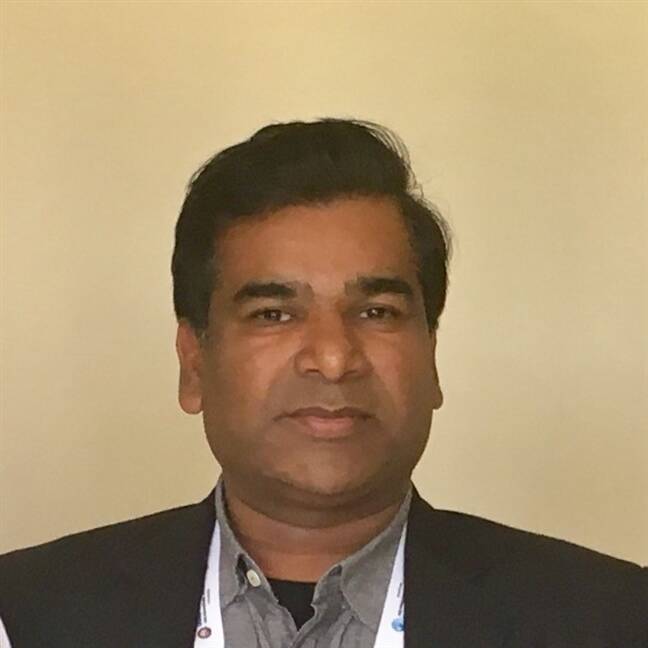 Dr. Biradar has authored over 200 publications, which include 75 refereed journal publications, 24 books and book chapters, and over 100 other publications. He is also the recipient of numerous awards and honors, including the Association of Agricultural Scientists of Indian Origin’s Outstanding Young Scientist Award in 2013.

Successful scaling of agricultural technology requires a spatial explicit framework for targeting the right variety at the right place. This entails a multi-criteria evaluation (MCE) approach, using a set of determining factors to delineate the...

Climate change poses a significant threat to agroecosystems, especially in the dry areas, characterized by abrupt precipitation pattern and frequent drought events. Ideal crops, tolerant to these events, such as cactus, can perform well under such...

Mapping the spatial and temporal dynamics of cropland is an important prerequisite for regular crop condition monitoring, management of land and water resources, or tracing and understanding the environmental impacts of agriculture. Analyzing...

Changes in barley (Hordeum vulgare L. subsp. vulgare) genetic diversity and structure in Jordan over a period of 31 years

In the context of growing populations and limited resources, the sustainable intensification of agricultural production is of great importance to achieve food security. As the need to support management at a range of spatial scales grows, decision...

Exacerbated grassland degradation and desertification in Central Asia during 2000–2014

To understand water productivity of crops cultivated in the Eastern Province
of Saudi Arabia, this study was conducted to generate a reliable crop type
map using a multi-temporal satellite data (ASTER, Landsat-8 and MODIS) and
crop phenology....

Meeting the food and nutritional demands of ever growing human population will cause immense pressure on agricultural lands and natural resource bases across the world. This challenge can be met only by proper land and water management, which...

Several factors describe the broad pattern of diversity in plant species distribution. We explore these determinants of species richness in Western Himalayas using high-resolution species data available for the area to energy, water, physiography and...

Availability of national land cover database plays a fundamental role in understanding environmental and socio-ecological issues under a constant state of changing climate and demography. However, systematic, compatible, and open access land use and...

The Arab region has the largest food deficit in the world, due to the strained natural resource base and vulnerabilities to climate change implications, which put tremendous pressure on achieving food security. During the last ten years a number of...

Genotypic and phenotypic changes in wild barley (Hordeum vulgare subsp. spontaneum) during a period of climate change in Jordan

Climate change and other anthropogenic
disturbances can lead to the loss of genetic variation
and thereby affect evolutionary potential and survival
of plant populations in the wild. We examined these
predictions in the primary wild relative of...

The Kingdom of Saudi Arabia (KSA) is under
extreme water shortage conditions. About 80 % of water in
KSA is utilized by the agricultural sector; therefore, proper
management of irrigation water is required to produce more
food from less water. Water...

Maize (Zea mays L.) is the second most commonly grown crop worldwide and number one staple food in Africa where it accounts for more than 50% of the energy requirements. However, despite its widespread cultivation and the significance of maize...

tImproving crop area and/or crop yields in agricultural regions is one of the foremost scientific challengesfor the next decades. This is especially true in irrigated areas because sustainable intensification of irri-gated crop production is...

Characterization of soil properties is a key step in understanding the source of spatial
variability in the productivity across agricultural fields. A study on a 16 ha field located in the
eastern region of Saudi Arabia was undertaken to investigate...

Due to rapid population growth and urbanization, paddy rice agriculture is experiencing substantial changes in the spatiotemporal pattern of planting areas in the two most populous countries—China and India—where food security is always the primary...

Dryland biodiversity has only recently got due attention because of its potential to contribute in overcoming the effects of global challenges caused by land degradation and and climate change (FAO, 1989). More particularly, the non-tropical dryland...

The Asian Migratory locust (Locusta migratoria migratoria L.) is a pest that continuously threatens crops
in the Amudarya River delta near the Aral Sea in Uzbekistan, Central Asia. Its development coincides with the growing period of its main food...

Area and spatial distribution information of paddy rice are important for understanding of food security, water use, greenhouse gas emission, and disease transmission. Due to climatic warming and increasing food demand, paddy rice has been expanding...

Priority regions for research on dryland cereals and legumes

Dryland cereals and legumes are important crops in farming systems across the world. Yet they are frequently neglected among the priorities for international agricultural research and development, often due to lack of information on their magnitude...

Optimum wheat (Triticum aestivum L.) yield can be achieved by
developing and growing the best genotypes in the most suited
environments. However, exhaustive field measurements are
required to characterize plants with desirable traits in breeding
plot...

The vulnerability of wheat is likely to increase due to an increase of heat stress
according to recent wheat-production simulation models combined with local
climate-change data. This is particularly an issue affecting dryland areas where global
cli...

Extensive forest changes have occurred in monsoon Asia, substantially affecting climate, carbon cycle
and biodiversity. Accurate forest cover maps at fine spatial resolutions are required to qualify and
quantify these effects. In this study, an...

management of water resources, and estimation of greenhouse gas (methane) emissions. Paddy rice agriculture
has expanded rapidly in northeastern China in the last decade, but there are no updated maps of
paddy rice fields in the region. Existing...

A seamless vegetation type map of India (scale 1: 50,000) prepared using medium-resolution IRS LISS-IIIimages is presented. The map was created using an on-screen visual interpretation technique and has anaccuracy of 90%, as assessed using 15,565...

A pilot study on the effect of Cu, Zn, and Cd on the spectral curves and chlorophyll of wheat canopy at tiller stage

The aim of this study was to investigate canopy spectral reflectance responses to
different levels of heavy metals copper (Cu), zinc (Zn), and cadmium (Cd) induced
stress. Random blocks design experiment was conducted to simulate Cu, Zn, and Cd
at...

Lentil (Lens culinaris Medik.) could possibly become a major crop in East Africa due to its many uses as
a food and feed. Also, its ability to undertake symbiotic nitrogen ﬁxation is an advantage over cereal crops.
This study simulated lentil yield...

Accurate estimation of gross primary production (GPP) is critical for understanding ecosystem response to climate
variability and change. Satellite-based diagnostic models, which use satellite images and/or climate data
as input, are widely used to...

Agricultural land use change substantially affects climate,water, ecosystems, biodiversity, and humanwelfare. In
recent decades, due to increasing population and food demand and the backdrop of global warming, croplands
have been expanding into...

Spatial characterization of colonies of the flying fox bat, a carrier of Nipah Virus in Thailand

A major reservoir of Nipah virus is believed to be the flying fox genus Pteropus, a fruit bat distributed
across many of the world’s tropical and sub-tropical areas. The emergence of the virus and its zoonotic transmission
to livestock and humans...

The primary objective of this study was to assess the water productivity (WP) of the annual (wheat, barley, and corn) and biennial (alfalfa and Rhodes grass) crops cultivated under centerpivot irrigation located over desert areas of the Al-Kharj...

The potential and uptake of remote sensing in insurance: A review

Drought affects vegetation photosynthesis and growth.Many studies have used the normalized difference vegetation
index (NDVI), which is calculated as the normalized ratio between near infrared and red spectral bands in
satellite images, to evaluate...

Southeast Asia experienced higher rates of deforestation than other continents in the 1990s and still was a hotspot of forest
change in the 2000s. Biodiversity conservation planning and accurate estimation of forest carbon fluxes and pools need
more...

INTELLIGENT OBJECT BASED SMOOTHING: AN ALGORITHM FOR REMOVING NOISES IN THE CLASSIFIED SATELLITE IMAGE

The existing smoothing algorithms like mean, median, majority/mode filters are not efficient in smoothing the classified image derived from the satellite data. Mean filter alters original class pattern and also it is influenced by the outliers in the...

Thailand experienced several epidemic waves of the highly pathogenic avian influenza (HPAI) H5N1 between 2004 and 2005. This study investigated the role of water in the landscape, which has not been previously assessed because of a lack of high...

Due to increasing global demand for natural rubber products, rubber (Hevea brasiliensis) plantation expansion
has occurred in many regions where it was originally considered unsuitable. However, accurate maps
of rubber plantations are not available,...