ICARDA has gone through some major changes within the organization over the past three years. But one thing has remained steadfast - our commitment to improving smallholder livelihoods and bringing food security in dry areas through research and innovation. Our partnerships with countries have strengthened and new ones developed, energizing our mission more than ever before.

We welcome you to the first issue of dryWIRE, a quarterly newsletter, designed to give you a peek into the range of ICARDA’s research activities and the difference they are making in dryland communities.

We welcome your feedback on the newsletter and look forward to greater engagement in enabling sustainable agricultural development in dry and marginal areas - a critical challenge of our times. 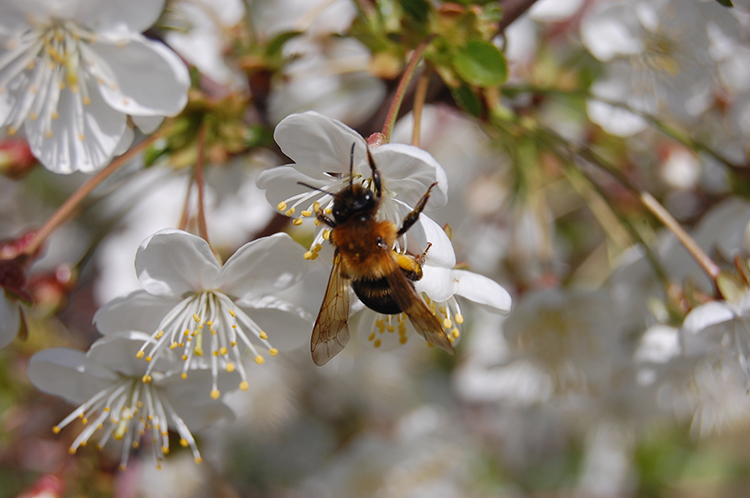 Bringing Back the Buzz: A 'Blueprint' for Smallholders

As countries across the dry areas contend with rising temperatures and increasing water scarcity, farmers need rapid solutions to maintain food production. Are there any practical measures for farmers?

Pollinators, often overlooked in food security strategy, offer one such solution -a self-sustainable and win-win strategy for farmers and agroecosystems. Studies have shown that wild pollinators - a term that incorporates a wide range of creatures including wild bees, bumblebees, flies, butterflies, midges, wasps, and even birds and bats - are a proven means of increasing productivity of many crops, both in terms of quality and quantity. They increase the harvest of 87 out of 115 most important global food crops, generating over US$180 billion yearly (estimate as of 2005).

The declining diversity of pollinators is a serious and growing global concern, yet not quite on the agenda for taking measures to protect these valuable resources.

What can be done to remedy this situation? ICARDA research developed proactive Farming with Alternative Pollinators (FAP), a cost-effective and practical solution to safeguarding pollinators, which make farming the key agent to sustain pollinator diversity.

In a first-of-its kind scientific implementation, scientists introduced FAP on farmers' plots as part of building community resilience in Uzbekistan - an area predicted to be one of the worst affected by climate change. The project used control experiments to quantify impacts from habitat enhancement and developed a ‘blueprint’ farmers can employ to enhance pollination services at very low costs.

The approach was experimented with farmers growing cucumbers. To attract diverse pollinators, 25% of each plot was used to grow a variety of crops such as coriander, sunflower and pumpkin, along with locally made nesting support, while 75% of the plot was used for main crop of cucumbers. The approach led to an increase in net income by US$3,653 per hectare from better quality (market price) and quantity of cucumbers, and added revenue from the habitat strip. In another experiment, FAP doubled the harvest of sour cherry in the first year.

Based on the results, FAP incorporated into climate change adaptation strategies could bring significant benefit, particularly in developing countries, where insect-pollinated agriculture accounts for a greater share of the national GDP.

Supported by: BMUB and GIZ (Germany) 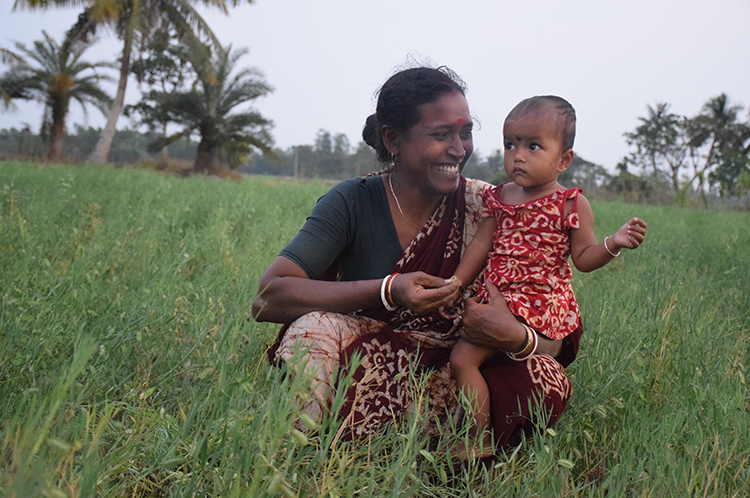 A Once Barred Crop, Now a Boon

When cyclone Aila struck the Sunderbans along the Bay of Bengal in 2009, it devastated thousands of hectares of fertile land used for rice farming. As the sea water receded, it left behind soil and water so saline, nothing would grow for several seasons, leaving thousands of farmers without any source of income or even food. Grass pea, a hardy legume crop - easy to grow and known to survive in the toughest of conditions - would have provided the needed relief if it wasn’t for a neurotoxin present in its seeds. Locally known as ‘Khesari’, grass pea is typically used for fodder and was barred by the Indian government in 1960s believed to be linked to paralysis of lower limbs if consumed in large quantities over a period.

A research partnership between ICARDA and Indian institutions initiated developing new strains of grass pea to make them fit for prolonged human consumption. Crop researchers, working under India’s National Food Security Mission, developed several new varieties with less than 0.1% toxin, with tolerance to drought and water logging, and far higher yields (up to 43% more). “Varieties like Prateek have 0.08% and Ratan only 0.06% toxin levels”, says Shiv Kumar Agarwal, leading the legume breeding program at ICARDA. A partnership with a local Sunderbans NGO, the Tagore Society for Rural Development, helped promote these varieties in villages through awareness campaigns and field days, specially training women farmers on growing grass pea in rice fallows lands as a second crop, storing and cooking methods to ensure safe consumption. The farmers were able to swap old toxic seeds with new safe varieties through village seed programs.

Today grass pea is back on the menu for farmers in a big way. Not only is it safe to consume, it is providing significant nutrition, which is largely lacking in the diets of India’s rural poor. Grass pea contains up to 34% protein and other essential micronutrients, especially iron and zinc. With resilience to drought, excess moisture, salinity, diseases and pests, it has become an ‘insurance crop’ ensuring food and nutrition for low-income farmer families when all else fails.

"So far the project has reached 109 villages in 13 districts across four states in India", reports Ashutosh Sarker, ICARDA's regional coordinator and legume breeder. 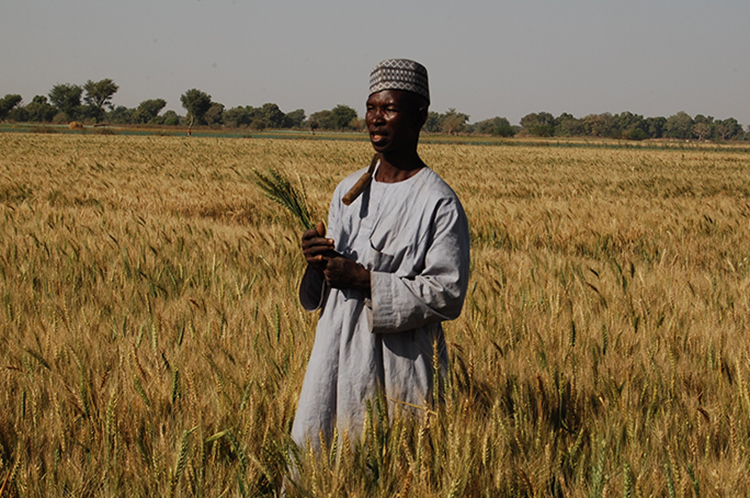 Heat stress is a major constraint on wheat production in Sub-Saharan Africa. In Sudan, for instance, temperatures often exceed 41 C, an intense heat that limits crop performance and yields - the national yield average for wheat is only 2 tons per hectare (t/ha), and can often be much lower. Climate change is estimated to make this situation even worse.

The innovation of heat-tolerant wheat varieties is providing a breakthrough for African farmers to boost wheat production - despite rising temperatures and increasing water scarcity. Farmers are achieving higher and more stable yields over successive growing seasons, reaping up to 6 t/ha. The impact: higher incomes and more productive livelihoods.

The success also has policy implications: it is convincing countries’ decision-makers that domestic wheat production is a solution to Africa’s growing dependence on wheat imports. Sudan, for instance, currently produces only 30% of the wheat it consumes and imports some 1.5 million tons of wheat each year. Likewise in Nigeria, rising demand for wheat forces the country to import over 4 million tons per year.
Both Sudan and Nigeria are placing the improved wheat varieties at the center of their food security strategy to enhance self-sufficiency.

An integrated ‘systems’ approach
The successes are not due to the introduction of improved varieties alone. Seed is being disseminated as part of a package of interventions aimed at transforming wheat production; these include: optimal land preparation and sowing rates, integrated pest management, and more efficient irrigation systems.

While these technologies enable Africa’s wheat transformation, they alone cannot sustain the change. ‘Innovation platforms’, a participatory research dissemination strategy is bringing together all stakeholder groups - policymakers, scientists, farmers, and the private sector - to identify challenges and jointly define the solutions required to overcome these challenges.

These wheat production improvement activities are part of a larger initiative to strengthen the value chain of four major strategic crops in Africa. Support to Agricultural Research for Development on Strategic Commodities in Africa (SARD-SC) aims to bring greater self-sufficiency in the continent through wheat, rice, cassava and maize. ICARDA is leading the wheat component implemented across 12 Sub-Saharan African countries. To learn more, visit http://sard-sc-wheat.icarda.org/ 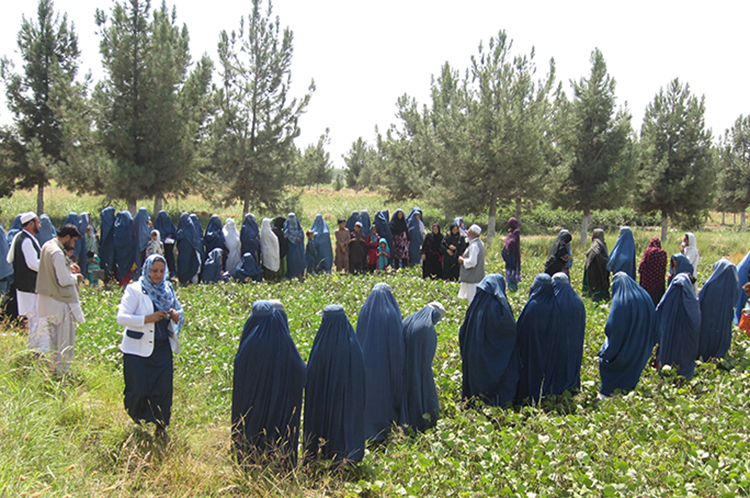 The past couple of decades of war and instability in Afghanistan have devastated its once thriving agriculture sector. A fall-out has been the hardship faced by women in the country. As men left home over the years to go to war and in more recent years, seeking employment in services, women have been left behind in villages alone to take care of the household and the land. As a result, agriculture and livestock-raising has seen an increasing role from women. They have become key to agriculture development and rebuilding of the country.

The Dairy Goat Management Project, a flagship initiative of ICARDA to improve the livelihoods of women, is coming to an end this year after a journey of six years, with some remarkable outcomes. Yashpal Saharawat, the Afghanistan country manager, shares some insights on the challenges and rewards of working with women in Afghanistan.

“The biggest challenge of working with women in traditional societies is how to contact women and bring them to participate in activities. Establishing the trust has perhaps been a key enabler for success”, reflects Saharawat. “At ICARDA, we are fortunate to have built a deep trust with the local authorities and village heads through our continued presence and partnership activities over the past 13 years. We talk to village heads who introduce us to open-minded farmers, who then can put us in touch with the women of households”, he explains.

The project combined research and development activities for target groups of rural women, providing them with technologies on improving goat and forage production. A major focus was building their capacity on animal health and value addition to milk and dairy products. Special cooperatives were developed to provide eco-friendly infrastructure, while the Ministry of Agriculture supported the value chain by opening a counter within the ministry where women can come and sell their products.

All these activities for women groups were led by women staff across 26 villages in Baghlan and Nangarhar Provinces.

Sawoor, a widow in Malang village, was one of the beneficiaries who received two goats as start-up under the project’s Pass-on-the-Gift scheme. “I was working in the fields as laborer and was very poor before the project. I now have five goats and two kids that provide fresh milk for my family. I produce yoghurt from the extra milk and sell it to the shopkeeper in my village. I earn 4,000-5,000 Afghani per month and can now send my children to school.”

Saharawat summarizes the impacts in a nutshell: “It’s the gained economic stability. If we were to ask our women beneficiaries, what change are they most happy about, they would probably all say, they now have money in their hands to spend and are able to educate and provide for their children of their will”. (Read about impacts here).

Women like Sawoor have now become role models in their villages and encourage other women to participate in the initiative. The project is also scaling out the technologies and the model by developing the capacity of NGOs active in the region, like MADERA, Action Aid, Aga Khan and Care.
Read more

Supported by: IFAD and Afghanistan Ministry of Agriculture, Irrigation and Livestock

Dryland Systems is global agricultural research partnership to realize the potential of dryland communities. The program is a CGIAR initiative led by ICARDA.