Every year in South Asia, vast tracts of land lie idle (fallow) between harvests of crops such as rice and the next planting season. With millions in the region suffering from malnutrition, especially micronutrient malnutrition (deficiency of vitamins and minerals), ICARDA, alongside partners in Bangladesh, India and Nepal, researched, developed ,and released improved varieties of lentils, a common food across the region. However unlike standard lentils,  ICARDA varieties reach maturity quickly, are high in protein and natural vitamins, and are micronutrient-dense, biofortified with zinc and iron (to fight regional deficiencies).

Usually pulses such as lentils do not fit into a short-season window, however through trait discovery and deployment in appropriate agronomic backgrounds the new ICARDA lentil varieties can mature within the 100-day fallow window and are adapted to local settings such as the staple crop grown beforehand, and different soil fertilities and moisture levels.

To accelerate large-scale adoption of the new lentil varieties, and adaptation to successful new approaches, ICARDA’s participatory research-for-development was carried out with inclusion of farmer organizations. ICARDA delivered packages that integrate demonstrations and promotion, inputs, and trainings on the technologies. Strong support and increased seed availability was achieved by strengthening informal and formal seed systems, and digitization and modelling through remote sensing, real-time mapping and crop modelling were used to deploy suitable varieties that fit fallow windows as well as to simulate yield gain of lentil and help identify optimum planting dates and lentil phenology in the target regions. 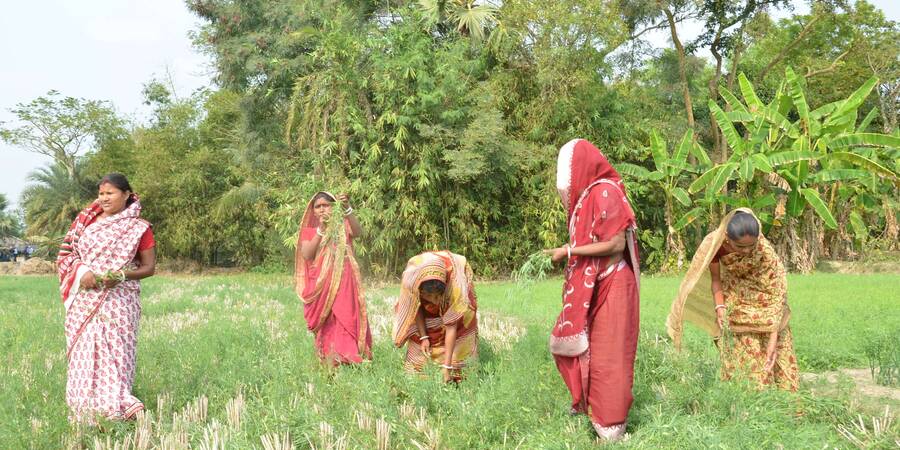 A recent impact study on the adoption of micronutrient rich lentil cultivars in Bangladesh showed 99% of the 150,000 hectares under rice system are now planted between harvests with the new improved varieties that showed 27% higher yields and 29% more income to farmers. ICARDA has contributed to UN SDG 1 and 2 across South Asia by small-scale farmers obtaining a bonus harvest of lentils from the same land as other crops and improving livelihoods and nutrition for themselves and their families. The additional domestic production in Bangladesh has even replaced a part of expensive imports.