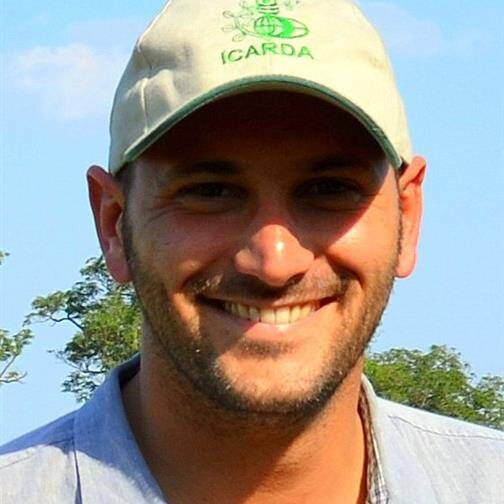 He was the recipient of the 2017 OLAM Prize for Innovation in Food Security for the release of heat-tolerant durum wheat varieties in the Senegal River Basin, and also won the Beachell-Borlaug Scholarship. He is a member of the Wheat Initiative’s Scientific Steering Committee, which oversees the Expert Working Group in Durum Wheat.

Effect of temperature on the expression of resistance to Hessian fly (Diptera: Cecidomyiidae) in durum wheat cultivars

Hessian fly, Mayetiola destructor (Say) is a destructive insect pest occurring in many wheat growing areas of the world. The most effective management option for controlling Hessian fly is the use of resistant wheat cultivars carrying specific...

Representative, broad and diverse collections are a primary resource to dissect genetic diversity and meet pre-breeding and breeding goals through the identification of beneficial alleles for target traits. From 2,500 tetraploid wheat accessions...

Crop wild relatives (CWR) are an important source of genetic diversity for crop improvement. The aim of this study was to assess the usefulness of deploying CWR in durum wheat breeding (Triticum turgidum ssp. durum). A set of 60 accessions was...

Durum wheat is an important crop for the human diet and its consumption is gaining popularity. In order to ensure that durum wheat production maintains the pace with the increase in demand, it is necessary to raise productivity by approximately 1.5%...

Heat stress occurring during the reproductive stage of wheat has a detrimental effect on productivity. A durum wheat core set was exposed to simulated terminal heat stress by applying plastic tunnels at the time of flowering over two seasons. Mean...

The ICARDA’s durum wheat breeding program was established in 1977 in Aleppo, Syria, where it continued its work targeted to the drylands of the developing world until 2012, when it was forced to relocate. This movement represented an occasion to...

Tunisia, being part of the secondary center of diversity for durum wheat, has rich unexploited landraces that are being continuously lost and replaced by high yielding modern cultivars. This study aimed to investigate the genetic diversity and...

Durum wheat (Triticum durum Desf.) breeders over the past century have increased the productivity and resilience of this crop via strong selection applied to genes controlling agronomically important traits. Along this process, some of the primitive...

Durum wheat (Triticum durum Desf.) is the 10th most important crop in the world, and its cultivation occurs on a vast array of international agroenvironments. However, its wide international adaptation is only marginally documented. Here, 24 durum...

Durum wheat is the 10th most important crop in the world, and its use traces back to the origin of agriculture. Unfortunately, in the last century only part of the genetic diversity available for this species has been captured in modern varieties...

The virulence of 135 single-spore isolates of Pyrenophora tritici-repentis, collected from durum wheat fields representing most of the major agro-ecological zones of Morocco from 2013 to 2015, was assessed on six international differential wheat...

Wheat is the principal staple food in most countries of the Central and West Asia and North Africa (CWANA) region, accounting for 45% of the region’s per capita calorie intake with an average wheat consumption of about 200 kg/capita/year, which is...

Breeding schemes for the implementation of genomic selection in wheat (Triticum spp.)

In the last decade the breeding technology referred to as ‘genomic selection’ (GS) has been implementedin a variety of species, with particular success in animal breeding. Recent research shows the potentialof GS to reshape wheat breeding. Many...

Wheat (Triticum aestivum L.) flour represents one of the primary sources of calories and proteins for the human diet.
The increase in the wheat yield without losing its baking and milling quality is an important breeding objective. The
use of QTL...

Since the dawn of wheat cytogenetics, chromosome 3B has been known to harbor a gene(s) that, when removed, causes chromosome desynapsis and gametic sterility. The lack of natural genetic diversity for this gene(s) has prevented any attempt to fine...

Development of COS-SNP and HRM markers for highthroughput and reliable haplotype-based detection of Lr14a in durum wheat (Triticum durum Desf.)

The species cytoplasm specific (scs) genes affect nuclear-cytoplasmic interactions in interspecific hybrids. A radiation hybrid (RH) mapping population of 188 individuals was employed to refine the location of the scsae locus on Triticum aestivum...

In the course of evolution, the genomes of grasses have maintained an observable degree of gene order conservation. The information available for already sequenced genomes can be used to predict the gene order of nonsequenced species by means of...