Barley Gets a Makeover

A Breakthrough in the Fight against Sunn Pest

Turning the tide with grey water

Barley Gets a Makeover
From subsistence crop to source of livelihoods 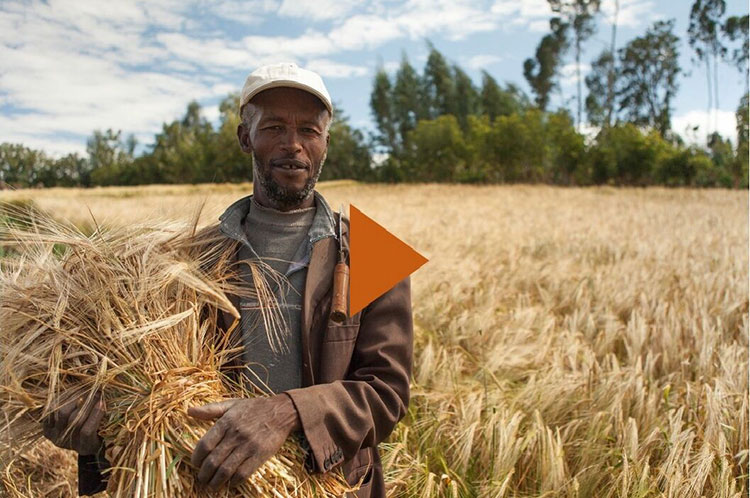 Gosaye Degefa, a smallholder farmer living in Asella in the Oromia region of Ethiopia, mainly grows food and malt barley. The local varieties that Gosaye was using were highly vulnerable to diseases and gave poor yield, barely enough to feed his family.

Last year, Gosyae became one of the progressive farmers in Asella who participated in a project where a team of scientists from the Ethiopian Institute of Agricultural Research (EIAR) and ICARDA disseminated improved malt barley varieties to smallholders and trained them in related crop management practices. The varieties developed from germplasm provided by ICARDA’s barley improvement program are part of the team’s research activities targeting the new booming demand for malt barley by a rapidly growing market for malted beverages in Ethiopia.

Ethiopia is spending over US$20 million annually on malt barley imports, offering a huge income opportunity for the country’s subsistence farmers. Local malt production meets less than half of the current malt demand. ICARDA's scientists are working with EIAR to develop and disseminate barley varieties with traits such as high grain yield and superior malt quality, and tolerance to drought, disease and insect pests. From 13 varieties developed thus far, two improved varieties, Miscal 21 and IBON174/03 were successfully piloted by the industry and farmers for malt production last year.

Gosaye and other participating smallholders saw their yields more than double from 2 tonnes per hectare (t/ha) to 5 t/ha, which meant a jump in their incomes. Gosaye had surplus to sell for malt production purposes and today is even able to save money in the bank. While the boost in production is allowing malt factories to increase their production capacity and reduce imports.

Like Gosaye, about 4.5 million smallholder farmers grow barley in Ethiopia every year with an average productivity of 1.7 t/ha, one of the lowest yields in the world. The stakeholder partnership of smallholder farmers, scientists and beer producers is now opening new doors for improving possibly millions of livelihoods while cutting down on Ethiopia’s expensive malt barley imports.

This could herald a big change for subsistence barley farmers. Ramesh Verma, ICARDA’s lead barley breeder calls barley a “climate change crop.” Barley is known for its resilience, able to provide stable yields even under extreme conditions of water scarcity, drought, low and high temperatures, and soil salinity. As ICARDA’s mandate crop, it has been a key component of crop-livestock systems research in marginal drylands where impacts of climate change will be particularly harsh in years to come.

With rapidly growing economies of South Asia and East Africa, there is increasing consumerism, and along with that an expanding market for beer, health food and other malted beverages. ICARDA’s malt barley research aims to connect subsistence farmers in drylands to these market opportunities. “With this new value chain opportunity, we are targeting roughly 200,000 ha in each East Africa and South Asia region,” estimates Ramesh Verma.

Supported by: The United States Agency for International Development

In Morocco, the government subsidizes liquefied petroleum gas (LPG) for domestic use by poor households. What the government didn’t foresee was its ingenious use by farmers to extract groundwater for irrigation. The majority of groundwater extraction is powered by LPG which is costing the country heavily – both economically as all of Morocco’s LPG is imported – and environmentally, from high carbon dioxide emissions.

As the Ministry of Agriculture is looking toward solar panels to resolve the fuel issue with groundwater extraction, it was crucial for the government to build a firm business case upfront – assess the returns and an effective regulatory framework to pre-empt any downside to its investment. ICARDA’s socio-economists have been assisting the government in this endeavor through a cost–benefit analysis, based on surveys with 112 Moroccan farmers in a region with wide groundwater use for irrigation.

The study found that switching to solar power would reduce pumping costs by 33% to 60% in the study area compared with continuing with LPG. The solar initiative will benefit Morocco's public purse, potentially saving between US$9 and US$39 million each year as per the analysis. In environmental benefits, solar power will reduce carbon dioxide emissions per farmer per year by roughly one-third, compared with LPG use.

However, the sensitivity analysis also indicated a large upfront investment with installing solar energy, given the uncertainty and risk associated with it. Government subsidies to purchase solar systems will be key enablers for farmers to switch.

In another word of caution for the Moroccan government, the study found that installation of water meters would be essential to control extraction with solar power, as once it is installed the cost of pumping to the farmers is virtually zero and thus likely to lead to an increase in groundwater extraction.

Drawing confidence from the study results, the Moroccan Ministry of Agriculture is moving forward with the use of meters and subsidizing the installation cost of solar power for pumping groundwater. “The findings are useful for guiding policy decisions related to sustainable management of aquifers and energy,” says Hind Abdaoui, Renewable Energy Officer at the Moroccan Ministry of Energy, Mining, Water and Environment, involved in the decision-making. ICARDA’s collaboration with the ministry aims to provide scientific inputs that can ensure a robust framework for Morocco’s solar energy initiative for pumping groundwater for agriculture use, so it is a win-win for all – government, farmers and environment. (More information)

Supported by: CGIAR Research Program on Policy, Institutions and Markets

A Breakthrough in the Fight against Sunn Pest 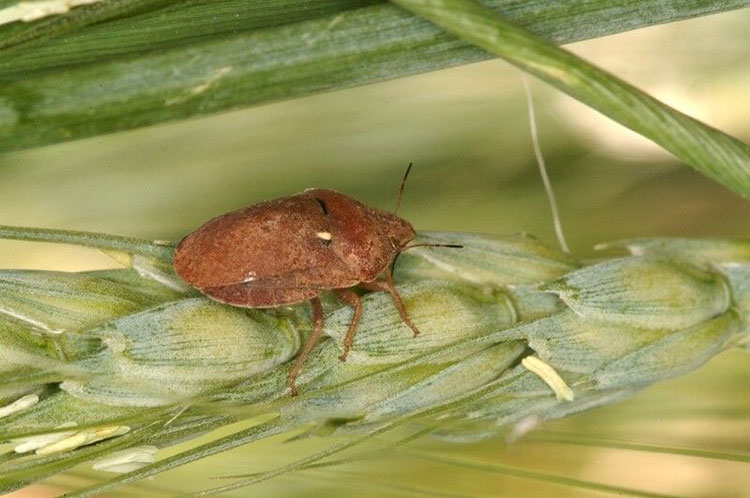 Farmers often reach for pesticides to counter the threat of Sunn pest – a highly destructive insect that attacks wheat crops across North Africa and Central and West Asia. Chemicals offer a quick solution in controlling a pest that affects up to 15 million ha of wheat each year and is capable of causing losses of 90% in affected fields.

But this option comes at a cost – to both the environment and human health. It is also expensive, representing an additional financial burden on poor farmers who spend over US$150 million each year on pesticide treatments in pest-prone regions.

More sustainable, practical, and cost-effective solutions are therefore desperately needed. Acknowledging this, ICARDA’s approach to Sunn pest eradication involves 'host plant resistance' breeding wheat varieties that either retard the development of these insects, or have traits that Sunn pest avoid.
The problem, however, is the time it takes to breed these varieties: breeders often have to search through hundreds of thousands of accessions, randomly looking for material with desired genetic traits through trial and error.

A new mathematical approach – 'FIGS' or 'Focused Identification of Germplasm Strategy' – is transforming this hunt for crop breeders.

At the core of FIGS is a powerful algorithm that matches plant traits with geographic and agro-climatic information, allowing the rapid searching of thousands of plant samples in genebanks to pinpoint a small set of high potential types that meet the breeder’s strategy.

The application of FIGS proved to be game changing for tackling Sunn pest. Within a year, researchers found the traits they needed – after ten long years of random sampling with limited success. An initial search identified 534 likely accessions, field screening reduced these to 57, and advanced screening resulted in 9 candidates – one durum wheat and eight bread wheat accessions.

Host plant resistance and FIGS are proving to be a winning combination and are now forming a crucial part of ICARDA’s integrated pest management strategies, alongside the use of biological agents and bio-pesticides.  (Reference)

Turning the tide with grey water 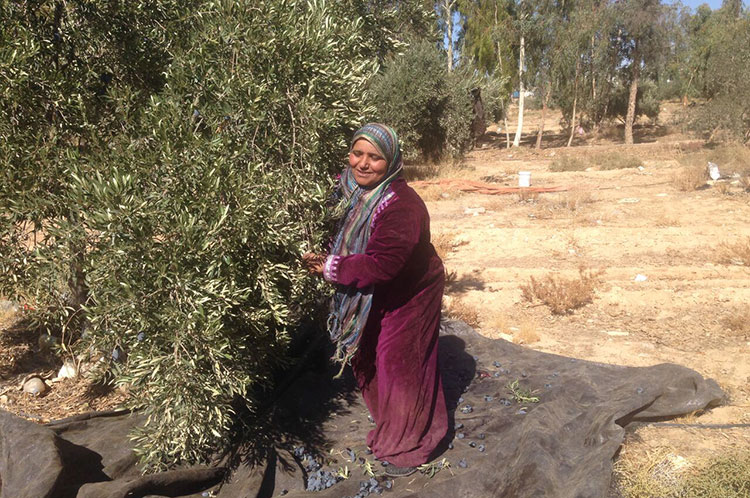 Women of the Al-Nour Cooperative Society in Jordan had never imagined that the water that ran down their drain would one day help them earn a living. After being trained at the Beit Jedi soap factory, in cooperation with the National Center for Agricultural Research & Extension, they have now started to produce and package soap which uses oil produced from the olives of trees irrigated with treated grey water.

As part of an ICARDA-led project on harnessing and managing marginal quality water for sustainable use, a few community-based interventions were initiated for safe and productive use of grey-water in home farming. The project included ways of improving grey water quality so that it can be safely used for crop production systems at household level.

It was found that after the installation of a wetland system for the treatment of grey water, the average weekly consumption of fresh water in households decreased by 33%. Treated grey water was used to irrigate 87% of the household trees, mostly almonds, olives, grapes and figs. Olive crops, as well as olive oil production increased since the installation of these grey water units. A local women’s grey water use society was created which initiated activities to enhance the production and marketing of grey water byproducts. These initiatives included soap production using the olive oil from trees irrigated with treated grey water.

In a situation where around 700 million people in 43 countries suffer from water scarcity, devising mechanisms to cope with the growing challenge of water stress could go a long way. Another solution proposed by the marginal quality water project tackled salinity, a major challenge to food productivity in drylands. Salt-affected soils in irrigated areas are estimated to have increased from 45 million ha in 1990 to 62 million ha in 2013. ‘Potential Business Opportunities from Saline Water and Salt-affected Land Resources’ is a first-ever systematic documentation of cases that highlight the business case for investing in saline water recycling and reuse as well as salt-affected land restoration in irrigated areas. For example, an irrigation system in the Aral Sea Basin offers at least 10,000 sites that could be harnessed for micro-hydro-turbines to produce renewable energy. View the report

Dryland Systems is global agricultural research partnership to realize the potential of dryland communities. The program is a CGIAR initiative led by ICARDA.