Conservation Agriculture has the potential to enhance soil fertility and reduce erosion across 260,000 hectares (ha) of fragile and degraded cereal land in Tunisia, according to a joint study by the country’s National Institute of Agronomic Research (INRAT) and ICARDA.

Conservation Agriculture (CA) – the practice of not plowing and leaving crop residue in fields for enhanced soil fertility and moisture conservation – was first introduced to Tunisia in 1999, where it was pilot-tested on 11 farms in the country’s North-East. While the area cultivated under CA has since grown, the practice is still applied on only 12,000 ha of agricultural land – an area distributed among 200 farmers and operated by some 102 seeders. The area currently under CA is shown in Figure 1 (41 percent is located in sub-humid, 30 percent in lower semi-arid, and 28 percent in upper semi-arid regions).

The constraints previously identified to explain the slow adoption of CA in Tunisia include: the small size of farms and the low investment capacity of farmers who are unable to afford Zero Tillage (ZT) machinery, and the mixed nature of agricultural production systems where an abundance of livestock, particularly small ruminants, creates significant demand for feed. This creates a dilemma for farmers who are forced to decide whether they use crop residue for livestock feed or mulch for CA.

Despite these constraints, however, previous studies suggest there is growing interest in CA and significant potential for its further expansion across Tunisia. An ICARDA-managed project funded by the International Fund for Agricultural Development (IFAD) – ‘Crops and Livestock Integration Under CA’ – demonstrated that small cereal farmers with degraded lands in Tunisia showed a high motivation and willingness to deploy their own resources and adopt CA.

At the policy level, agricultural development strategies in Tunisia are now explicitly referring to CA as a potential tool for soil conservation and more sustainable natural resource management. Consequently, the government is developing the most appropriate institutional framework to promote CA - for enhancing the adaptation capacity and the resilience of Tunisian agro-ecosystems to climate change. However, one crucial question remains: How can we identify priority areas where CA can be promoted and supported by the government? 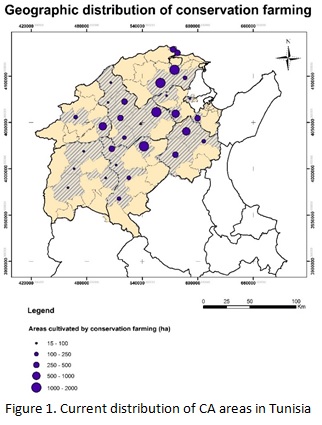 In order to address this question, the ICARDA-INRAT study – implemented within the framework of ‘Global Futures and Strategic Foresights,’ part of the CGIAR Research Program on Policies, Institutions and Markets - aims to identify fragile areas where CA could generate maximum impacts and gain public support.

The study first isolated vulnerable areas through the development of a set of agro-environmental indicators, which in addition to the location of CA-adopting farms, also included low soil carbon content, terrain with steep slopes, and areas dominated by cereal-based systems where the presence of livestock, namely small ruminants, is important. These choices were based on the assumption that CA is a durable alternative to reclaim rugged cropping landscapes where soils are characterized by low soil organic matter content – identified through an  updated national database on the organic content of Tunisian soils.

The initiative’s next step will involve simulating the impacts of CA adoption to further assist decision makers about the potential returns generated by investments in CA in identified areas. According to INRAT researcher Hatem Cheikh M’hamed: “We are going to  use the “International Model for Policy Analysis of Agricultural Commodities and Trade” (IMPACT) to simulate the effects of CA adoption on overall cereal sector performances - including effects on average national yields, domestic cereal supply, and net trade.” 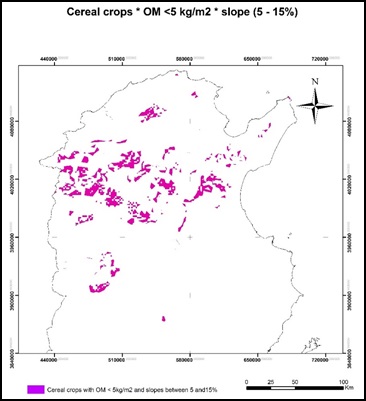